It took at least five hours to write this post, wait between the two dial up internet kiosks to open, bike back and forth once my document was stuck in a place where the internet modem broke, use at least four memory devices until one worked and then finally accept that I can not upload any photos in any way. About a week later, I am grateful to be able to share what’s been going on. 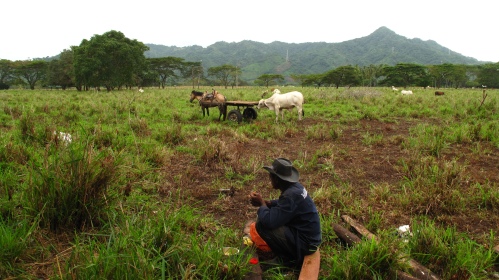 This man shared some yucca and cheese with me.

Palomino is a lot like Vermont, I am having a hard time leaving. Unfortunately, the glorious days of sunshine that I enjoyed here a week ago have disappeared. It has been raining to flood levels in most parts of the country. Palomino is a small town on Colombia´s Caribbean coast, shaded by the mountains of Sierra Nevada de Santa Marta National Park.  This is the only place in the world where mountains of nearly 6,000 m are found so close to the sea. 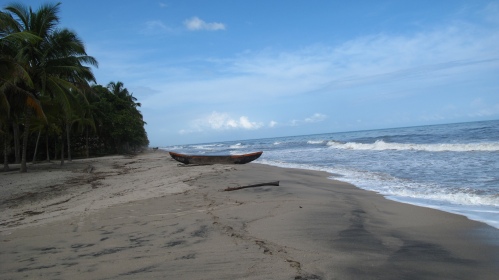 A Kogi and the FARC

I followed the path one day until I saw a small white building and a Kogi youth appeared with his burro, heading to the market in town. He explained that the leader or Mama, did not want anyone to enter at this time and that it was dangerous for me to be alone in the mountains. He offered me his company to hike out. I accepted and we chatted as we made our way alongside Rio Palomino.

From him I found out that Kogis get married between 16 and 20 years of age and live in a community of 50 or so Kogis. I found out his burro was packed with dried coca leaves and that the white building is a school put in by the government. I also learned that he often runs into FARC guys hiding high in the mountains. They are easy to tell apart from the other soldiers, he explained, because their uniforms have FARC patches. 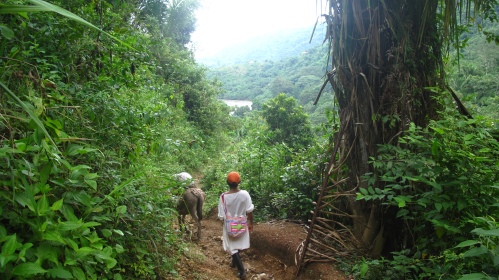 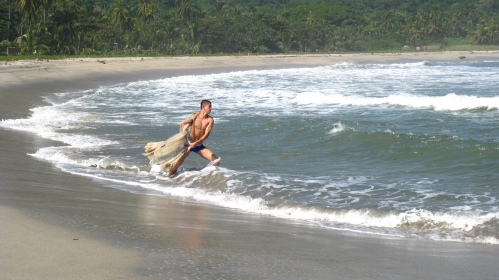 I arrived in Palomino after several unforgettable days in National Park Tayrona. The park is famous for enormous rock formations that were once worshiped by indigenous people.

I think it should also be famous for the kindness of the folks at Finca Don Pedro, the friendly white horse they let me ride around and Caliche´s bakery.

Stalling to take off, I got to Palomino after dark in the pouring rain. My only sense of where I was going was a place on the beach listed in my guidebook as a 40 minute walk from town. I paused to buy an arepa, a corn patty, and was asked where I was headed. My uncertainty led to a team of about five making phone calls and driving me to La Casa de Rosa. Señor Eugenio was there to greet me and offered me papaya juice. Once his wife, Milena, and daughter Paulina arrived it was clear I was in good hands, free from a machismo environment which is often hard to escape in Colombia. In just a few days I met Juan, Herman, Calisto and then Mary, Vladimir and Andres.  As in Vermont, I have entered a community of amazing individuals who have shared with me their homes and hearts.

A fisherman shows off the daily catch.

Still, I came as a viajero, a traveler, and so I left for Cabo de la Vela. In this brute, remote part of the country, the gorgeous landscape does little to alleviate the stress of a desert lifestyle and now, an influx of tourists. After just one day, I was looking forward to making the long trip back to my green mountains, golden sand and sky blue sea. 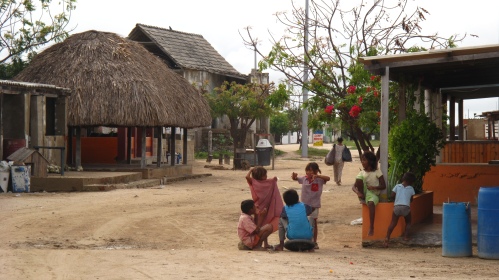 There’s not much to do in Cabo except enjoy the sun.

To get out of Cabo, I first had to take in four hours in the back of a chicken truck stuffed with people, gasoline and a goat on washed out dirt roads, all beginning before sunrise. Next, an hour and a half in a taxi would leave me with another hour and a half back to Palomino.  It was still early when I glanced at the dashboard of the taxi but the driver had us gliding along at 120 km/h until we spun out of control, hit and broke a tree, flipped and landed side down in a flooded ditch. When it all came to a halt, I was afraid to open my eyes. Miraculously, I walked away with nothing more than a broken IPOD and a few tiny scrapes on my left arm. I have never reveled more in the joy of simply being alive.

Last night, the river flooded and Milena and I scattered to collect anything that might float away. The water rose to a frightening level, completely flooding the ground near the house on both sides. About an hour later, the water receded but only after meeting the foundation of the house at least one foot off the ground.

I´ve been learning to open coconuts, cook arepas, rice, yucca, platanos and queso frito. The hardest part is usually peeling the vegetables. Opening coconuts is really hard. I made some posters reminding drivers that “Nuestra Vidas Esta En Tus Manos, Maneje Con Precaución, La Seguridad Es Nuestra Prioridad,” and posted them around town and in the gas stations. I helped a family translate their tour brochure into English and created a website for La Casa de Rosa, the family with whom I am staying. I´m teaching Paulina some English in exchange for a free stay. Now, I’m on my way to Minca, a small town nestled in the mountains about two hours south.

And one more thing,

2 responses to “Bienvenido A Palomino”