Gallos and the Mountains of Minca

Everyone told us it was about a six hour hike to Peak Kennedy. From there, one can see the entire mountain range surrounding the snow capped Sierra Nevada de Santa Marta. As I was packing up, Ned and Max, two Americans who are teaching English asked if they could join me. Of course, they could!

On the way back, Roman who was also with us, spotted a boa constrictor and proceeded to pick it up. 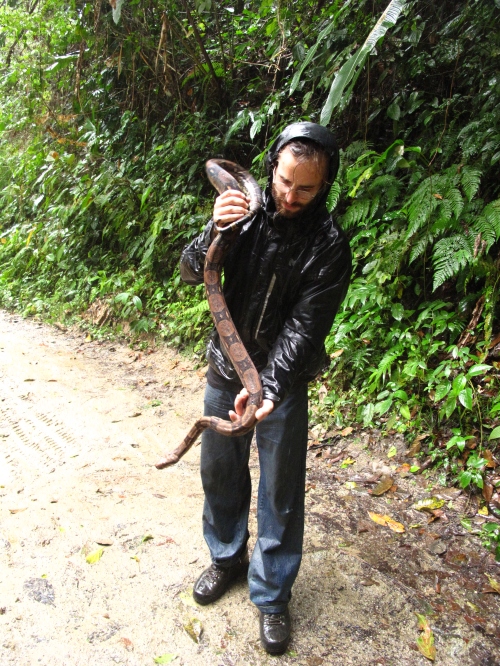 We took off about 10:30 in the morning hoping to arrive by late night and to see the sunrise the following day from the peak. Counting on two stores to keep the load light, I brought some instant mashed potatoes and a package of instant noodles for dinner along with some tea. It took about three hours just to get to Campano, the first town, which was really just a bar that sold junk food. The mild rain we were hiking in earlier switched to downpour mode. Out of place in some ways, the large screen plasma was broadcasting footage of the national flood disaster raging around the country. After lunch we bought lots of cookies, white bread and bocadillo, guava paste. Three hours later, we were nowhere near Cerro Kennedy. We camped in a bird reserve in an area where some trees had been cleared for what seemed like beehives. Dinner wasn´t much and we shared some of it with the dogs who had been following us all day. In the morning we started our climb and camped in the clouds about a half hour from the peak. We shared the package of noodles between the three of us and a package of cookies for each. Concern for Max and Ned´s tent in the rain led us to devise a tent fortress comprised of two tents and many large leaves.

At about four, we awoke to a clear sky full of bright stars and constellations seemingly within reach. Lights from Cartagena and Barranquila traced the coastline. Cerro Kennedy is also home to an antennae station as we found out, with a nice roof to sit and watch the sun rise. 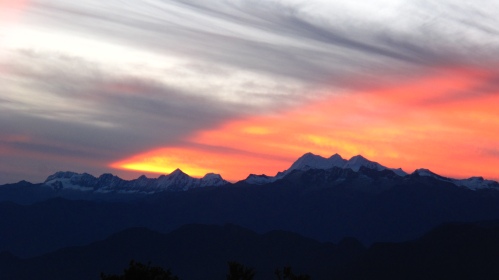 While not an experienced birder, the toucans and finches I glimpsed attest to the amazing biodiversity of this place. Coffee is a popular crop here but the soil is rocky and acidic, somewhat because of the Mexican weeping pine that was planted originally for logging but now is spreading.

A pile of coffee beans roasting in the sun caught my eye, I reached for my camera and continued to descend when I heard a voice shouting.

Coming around the bend I found Max and Ned passing a 50,000 bill and several others. An old woman was yelling at them from behind a barbed wire fence. The boys ushered me to keep going. It turned out my comrades paid for a dead rooster, whose body was never seen, by dogs that did not belong to us when the rooster was out on the main road. I was fairly upset that that they were blatantly taken advantage of but there wasn´t much we could do. I suggested we go back and get this 50,000 rooster for a meal.  We didn’t.The rest of the trip down proved murder and rain free.

One response to “Gallos and the Mountains of Minca”